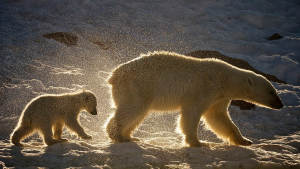 The African savannah has lions, and in the Arctic we have polar bears. Check out these facts that you probably did not know about the King of the Arctic.

This wild, yet cuddly looking creature dominates our ice-covered wilderness, and is at the very top of the food chain. If you are lucky, you may see a polar bear on Svalbard, perhaps on one of our boat or snowmobile tours.

1. The longest documented unbroken swim taken by a polar bear was 685 km over 6 days. Watch out, Michael Phelps - that’s the same distance as Washington DC to Boston. During the swim, the female bear lost 22 percent of her bodyweight. Studies show that we can expect more long distance swimmers amongst the polar bears in the future, due to the shrinking ice cover.

3. When we first look at languages, the polar bear is known as isbjørn (ice bear) in Norwegian, and is often called ‘kvitbjørn’ (white bear) or ‘polarbjørn’ (polar bear). Other names that are used include ‘Kongen av Arktis’ (The King of the Arctic) and less understandably ‘gammel man i skinnkappe’ (Old man in a fur jacket)

4. Polar bear females generally give birth to two young which live with their mother for more than two years, until they can hunt and survive on their own. The females receive no assistance from the males.

5. On average, the weight of an adult female bear is about 250 kg. Whilst pregnant, the females can weigh up to 500 kg. A fully grown male bear weighs around 450 kg.

7. These bears are amongst the animals that are most affected by climate change, as their home is literally melting under their feet.

8. Seal is the preferred meal for polar bears.

9. They are amongst the largest carnivorous mammals, and are the largest member of the bear family.

10. Polar bears can have blubber up to 10 cm thick. Under their light fur - which makes for excellent camouflage - polar bears have dark skin, which helps the warmth from the sun to sink in. Their fur even grows under their claws, which helps protect them from cold surfaces.

11. Even if most polar bears are born on land, they spend most of their life at sea. Two of the most important habitats for polar bears in the Arctic are the Beaufort Sea and the Chukchi Sea.

12. Polar bears are the only bear that is considered to be a marine animal.

13. Even if polar bears look adorable, they are powerful carnivores who are seldom afraid of humans, which makes them very dangerous.

14. These Arctic kings have no natural enemies.

This article was first published on Hurtigruten’s homepage.