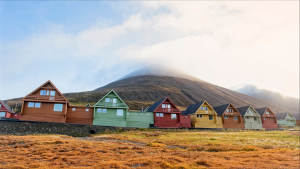 After a trip to Svalbard, it is normal to have learned a few things. Test your knowledge here!

• How many people live in Longyearbyen?
About 2400 people

• How many kilometers is it to the North Pole?
Around 1200 kilometers

• Why does the Svalbard Reindeer look different compared to the ones at the mainland?
They are specially designed to cope with the harsh climate. For example, they have shorter legs and necks to be able to retain heat better.

• What is the name of the “wine monopoly” at Svalbard?
Nordpolet

• Which month does the midnight sun season start?
April

• What is the most common dog breed on Svalbard?
Huskey

• What are the names of the four mountains that surround Longyearbyen?
Sarkofagen, Platåfjellet, Hiorthfjellet and Sukkertoppen.

• How tall is Svalbard’s highest mountain and what is it called?
Newtontoppen, 1712 moh.

Have you been bitten by the "Svalbard bacillus"? Come back for the sunny winter!

Get inspired and check out our package deals!

Don’t miss out on our great offers and news from Svalbard.